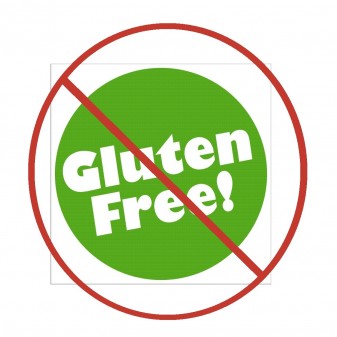 Our bodies weren’t designed to process gluten in the large amounts. I discovered this way back in 2001, when the level of farts my body generated reached epic proportions. I was a young trainer back then, so holding it in made training clients feel like absolute torture.

Release me from this gaseous prison!

That year I learned about gluten intolerance (from Paul Chek). I stopped eating Quaker Oats oatmeal every single frickin’ morning. And I immediately stopped farting seven hundred times per day (ok, that might be a slight exaggeration. Maybe)

I didn’t need any other proof or science, the proof was in the pudding. Maybe it wasn’t even the gluten? Maybe it was something else in the oats? I don’t know, and I couldn’t care less. I was free!

I remained gluten free (90 – 95% of the time) for a solid decade, during which time the cult of gluten free exploded. Fast forward to today; almost everyone has jumped on the “gluten free” band wagon, including the food industrial complex.

It blows my mind how much processed crap you can find in the supermarket with the words “Gluten Free” on it. In bold. (And please don’t get me started on the bastardization of the word “organic”.)

Unfortunately, while there are some good things about the gluten free movement – more people are questioning our reliance on grains, increased consideration for a powerful evolutionary perspective, and yes, less farting all around – in my opinion many people are jumping off of one band wagon (low carb), and hopping onto another one (no grains).

And, pun intended, that really stinks.

As a trainer for the last 14 years, I’ve watched new diets come and go, just like watching the tide, pulling many people along with its oceanic tug. And then comes the waves crashing down, followed by a beach littered with helpless people washed up on shore.

Watching people on the beach dust themselves off and immediately sprint back into the next set of waves totally freaks me out. Truly.

The opposite of being a ninja is being a human robot. A ninja adapts with supreme skill and grace by verifying things through their own experiences, and using those experience to develop and embody their own core principles.  Human robots blindly follows someone else’s programming, even if it destroys them.

In other words, a ninja will take each “diet” that comes along, investigate it, use it, make it their own, learn from it, and integrate what they learned into their being. When the next source of information comes along, they do the same, constantly building out their food skills with each passing tide of information.

So I wonder, have you fallen into any of these “gluten free” traps? I know I have! No need to feel bad about it, but maybe its time you learn how to surf?

If it comes in a packaging that says “gluten free”, its probably not real food. And you shouldn’t eat it. Why? Real food doesn’t come with packaging.

Sure, there are exceptions to the rule, but if you only followed this one rule, you’d radically transform your relationship to food and life. For the better.

Antidote: Don’t buy “food” with packaging. If it’s got words on it telling you how healthy it is, it’s immediately suspect. Try it for a week, or a day. I dare you.

If you avoid “gluten free” foods obsessively, like its your religion, and try compulsively to convert anyone who will listen, well than that obsessive behavior just might be more toxic than the gluten itself.

Just eat the roll, don’t give grains so much power over your life! Seriously.

Yes, if you have Celiac disease, or are very intolerant of gluten, it will be very helpful to completely detox your system.  Some people will never thrive with any amount of gluten in their diet. But most people have the ability to re-introduce a small amount of gluten after a detox period and still feel and look great. I’m one of them. And man, I love a cheeseburger with a good old fashioned bun, ketchup, and fries, hold the guilt.

Antidote: Don’t obsess about food, treat food like any other important relationship; with love, curiosity, respect, gratitude, and admiration. What if you thought of food as your lover? Now THAT would be an interesting exercise. Are you ninja enough to give it a try? Don’t be surprised how much emotional stuff this practice brings up.

That “Betty Crocker Cake Icing” was always gluten free, they just updated their packaging since its now a buzzword. Another fact… that icing is poisonous, and always has been, no packaging update required. See rule number one.

Ok fine, no surprise here. But the same goes for those gluten free cookies with the new age packaging. If its got processed sugar in it, hydrogenated oils, but no gluten, its still crap.
Here are two simple equations to consider:

Because you’re mom poured a ton of love into that fresh baked bread, and the positivity of that love more than makes up for the negativity of a little gluten. Especially if you enjoy it without guilt…. see rule number two.

Even during my most hard core gluten free years, I’d always eat my grandmother’s ravioli. Yes, it was only on special occasions, and sure they had flour in them. But my grandmother now lives in the spirit world, so you know damn well I don’t regret those meals!

Antidote: Eat food prepared and cooked by people you love, including yourself. Evolutionary speaking, that’s how it went for hundreds of thousands of years. This may require learning how to cook, which could feel like a horrible inconvenience or a profound spiritual practice, all depending on you and your attitude.

Don’t listen to your body, or to science. Just do what some random person on the internet tells you (especially if they have a sexy ass website like this one) and everything will be okay.

You don’t need to develop a relationship to real food, or your body for that matter, because one day “they” will figure out how we can all live without food… like real robots.

Being a ninja takes strength, skills, and the courage to forge your own path; to be awake instead of blindly following other zombies off a cliff. Plenty are marching right off the “gluten free” cliff this very moment.

It’s wonderful people are more interested in food quality than ever. But we’ll never get to where we’re going if we don’t deepen our relationship to food, instead of whoring out our self-agency to fad marketing campaigns, industrial food companies, and fashionable diets.

So what are your thoughts about gluten? And if you’re really feeling courageous, I dare you to leave a comment about your relationship to food.