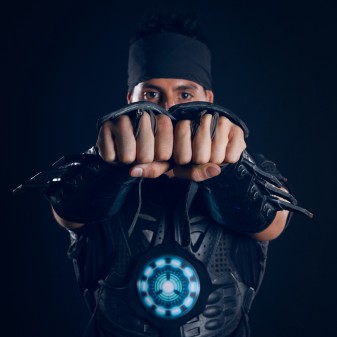 I’ve decided to commit myself to competing in and winning American Ninja Warrior, the spectacular obstacle course TV show on NBC.

Like a real ninja, I’ve silently and patiently watched this show from the sidelines during the past 7 years and delighted in its growth into a full-blown phenomenon. All this time I’ve waited quietly in the shadows, like a lion hunting its prey, waiting for the right moment to seize the opportunity with pure, focused action.

That moment is finally here!

Stepping Into the Light

So why do I pick this moment to emerge from the shadows?

I absolutely love what American Ninja Warrior stands for: inspiring people, especially kids, to move, compete against themselves, face their fears and overcome real obstacles. That’s basically the story of my life, in a nutshell. But being a massive fan of the show wasn’t enough for me to take the plunge and commit to such a huge mission. Only something on the magnitude of destiny could spur me to face so many fears and compete on such a public stage.

For years, I’ve nurtured a passionate hatred for 99% of television and mainstream media. The fact that reality TV is one of the most influential exports from our country makes me want to do a flying ninja dive roll off a cliff. Meanwhile, other personal trainers would go on TV promoting themselves, and I’d roll my eyes and scoff, “Don’t they know they’re becoming part of the problem?”

Could it be that I finally feel enough inner strength to admit that my hatred of TV is just a projection of my own feelings of helplessness and anger in my own life? My envy of others who go after their dreams, just a sly self-deception distracting me from the real pain in my heart.

The time has come to look deeper, acknowledge my shadow and step into the Light.

Here are my four intentions for competing on American Ninja Warrior for your entertainment:

My 4th last intention may sound like a doozy — and bold. In fact, it’s so large that it feels like it could even crush my soul. And yet, it’s my soul that dares me to dream so big.

In my heart, I know that making movement a foundational component for education will empower so many people and prevent so much future suffering.

How many generations of people must suffer from totally preventable lifestyle diseases that begin to develop during a decade of mandatory stationary education before we do something about it?

Learning how to move and master one’s body is a basic human right – and a prerequisite for health and happiness. And yet our schools force kids to sit still for most if not all of the day. Can we honestly say that reading, writing and math are more important than health and fitness? That science is more important than knowing how to take care of ourselves and the body? That sitting still is the best way to engage kids?

No one is talking about the need for movement to be a foundation of education. It’s time for a champion to rise up for that cause, and I was literally born for this exact mission! So how to I plan to do it?

Phase one is to get my arse on the show, in the first place. This is a big deal, since they receive 50,000+ audition videos and can only accept a few hundred contestants. That’s why I need your help and I’ll ask you for a small favor at the end of this post.

I created an audition video of epic proportions: authentic, unique, inspiring, vulnerable and awesome! In a single albeit overused on the internet word: EPIC!

But how did starting a movement revolution in school design become my mission in life?

Well, it all started back in the early 80s. Here’s the oldest picture I can find of little me at school – nursery school, at about three years old: 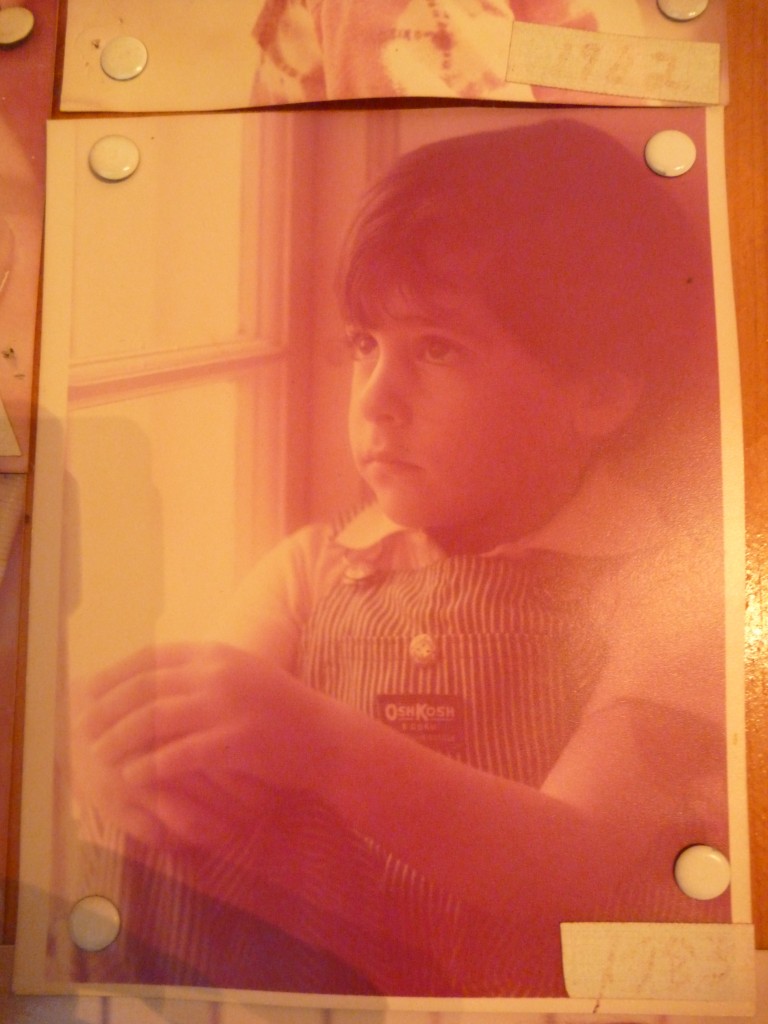 And interestingly enough, it’s also one of my first memories of this life, perhaps ingrained in my consciousness by this very photo, which has been pinned up at my grandparent’s house for two decades.

I was being punished and had just been banished to the window. Although I don’t remember exactly what I did to “deserve” that punishment, I clearly recall the feeling of injustice. It surged through my little body, followed by an unspeakable sadness (which, for some reason, my mother thought should be documented).

This wouldn’t be my only encounter with feeling like school was an insufferable burden. Most of us little boys are designed to learn by moving and playing, little girls too. But for me (and other kids with high “kinesthetic intelligence”) movement was like medicine, freedom and pure joy all rolled into one powerful elixir. 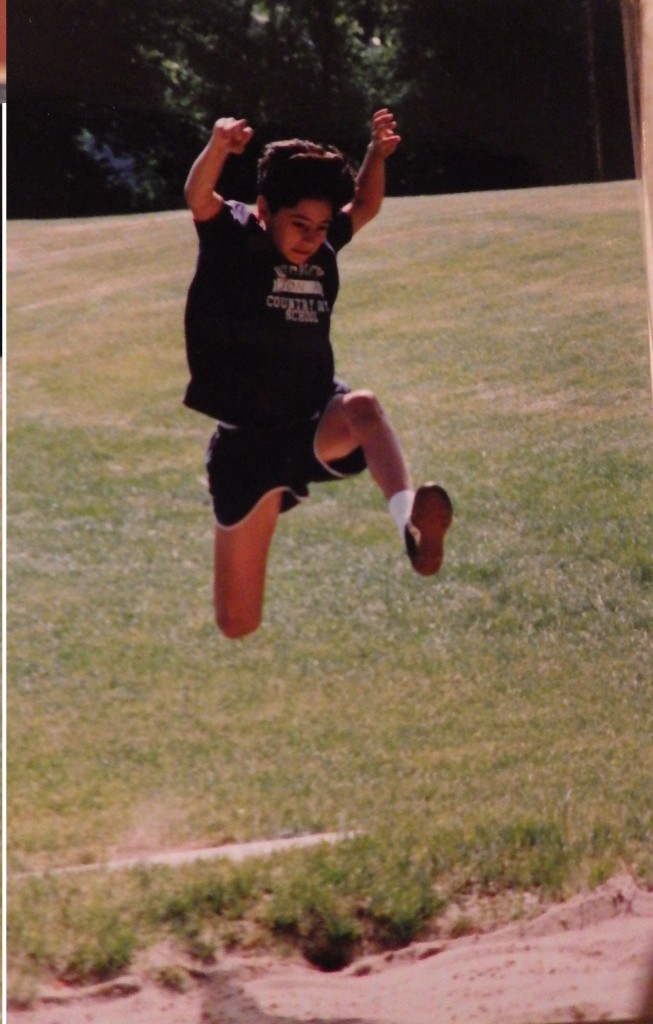 Beating out older kids to win the gold medal in the long jump at age 8.

A school system that forced me to sit down for five or six hours per day felt like torture. The only time I felt alive and valuable, like I belonged, was when we played sports or had recess. These were the times where I would thrive and excel. But the rest of the day, I was a bull in a china shop.

I did my best to adapt, trying not to run down halls and not launch myself down entire stair cases, but it was in my nature.

My preferred mode of locomotion was my own little boy version of “parkour”, before the modern concept even existed. Had one of my teachers been more open-minded and entrepreneurial, we could have invented it before anyone else!

Instead, all I got was detention.

Reality Check: I Was Very Privileged

My struggle didn’t really come from experiencing adversity at home, like with many less fortunate kids. Sure, I grew up in Queens NYC in the 80s, but I had two parents and they both loved me and believed in me, and I knew it. We were upper middle class and I went to a very well-respected private grade school. I took guitar lessons, had a black lab, and studied karate for 7 years after having my mind blown by “The Karate Kid” movie.

I benefited so much from my education (and especially my martial arts training), more than words can express. The three teachers that really made an impact in my life REALLY made an impact. And for all of this I’m deeply grateful.

It just doesn’t change the fact that grade school was also an ever abundant source of shame, trauma and frustration. The lack of movement made every day feel like a punishment. Even at a very young age, the standardized one-size-fits-all approach intuitively felt absurd to me. I felt like a square peg being forced to fit in a round hole. Was there was something wrong with me? I started to wonder…

Now, as a personal trainer who’s studied the human body for 15 years, I know that there was actually something right with me! It’s totally natural and healthy to move throughout the day. Sitting wreaks havoc on the body and the mind. So much preventable pain and suffering is caused by our sedentary western lifestyle. And that imbalance first gets ingrained into us during school.

I’m not bashing teachers. I love teachers, I think they’re severely undervalued in our culture. I think that what a great teacher does is more powerful, heroic and brilliant than the best military general. It’s the education system that is causing all these imbalances and it disempowers teachers just as much as it does kids. The rare schools that make movement a foundational component have kids that are more engaged and get better test scores. (More on this in Part 2 of this series.)

I was able to completely transform my life through movement – by using the obstacle of drug addiction and a neck injury as opportunities – that is precisely the reason why I must win American Ninja Warrior: to bring my vision of transforming the education system through movement and obstacles to all of America!

Believe in My Vision? I Need Your Help

The casting company is called A. Deign & Co and here are their Facebook and Twitter pages. They are swamped with applications right now, so if you contact them it will definitely help my chances of getting on the show. Like, right now, because their almost done casting!

Here are some sample tweets you just might want to send them:

In the next post, I’ll share how exactly I used movement as a form of medicine, lay the foundation for what a humane school would look like, share a little bit more about how I used movement to overcome my drug addiction and some of the science that proves that moving the body transforms the brain!